For many who live in narrow townhouses, a garden is but a pipe dream. And those who are lucky enough to be able to fit a green oasis into their urban homes will often find it ends up feeling constricted and walled-in. Sometimes, however, a bi-folding door is all it takes to bring a home’s urban garden to life so the owners can enjoy it all year round.

Anyone who lives in a narrow terraced house in the middle of a city is always thrilled to have their own garden. It’s an inviting space that stands out amongst its grey surroundings – the perfect place to relax. An urban garden is like having your own personal retreat, living in a terraced city house can make you even more appreciative of that little spot of greenery you can call your own.

That’s exactly how Lea Kuypers and Hugo Vos, who live in a townhouse close to Amsterdam, see it. “Our house is very narrow, and on top of that the garden is surrounded by tall buildings,” says Hugo. The couple’s home is no more than about five metres wide. However, it makes up for this in its length, stretching back quite some distance from the road before eventually opening up onto a small garden the same width as the building itself, surrounded on all sides by the walls of the neighbouring houses.

Bi-folding door replaces cumbersome wall as threshold to the garden

When the time came to renovate their home, the couple had earmarked their garden as deserving of particular attention. New greenery was planted around the pond, and the small gravel path between the flowers and bushes makes the garden seem larger than it is. At the far end, there is now an inviting gazebo. There’s no doubt about it: The couple are very fond of their little patch of paradise. They’ve really put their hearts into it, and so it stood to reason that they wanted to be able to see it as often as possible – even when it’s cold outside. They also wanted to make it feel more like part of the house itself.

The wall that used to face out onto the garden contained a lot of glass, but it was bulky and rigid. There was a clear boundary between the garden and the kitchen, even when the doors were open. This was what persuaded the two garden lovers to knock through the old separating wall on the ground floor entirely and replace it with a modern bi-folding door provided by Solarlux. The change has brought a lot more light into the new living and dining area, as the new glazing can be opened across almost its entire width. As a result, the dreamy garden and the living/dining area now flow into one another seamlessly.

A dreamlike oasis in the heart of the city

The two floor-to-ceiling bi-folding doors each comprise multiple interlinked glass elements, and can easily be folded away to the right or left, where they nestled inconspicuously at the side of the opening. Once they are open, only one supporting pillar remains – an unavoidable consequence of the building’s structural design. The glazing’s aluminium profiles are of the highest quality, and also provide excellent thermal insulation and certified anti-burglary protection in accordance with RC2.

Even when closed, the bi-foldings offer a wonderful view of the lush, fairy-tale garden. The renovation has given the family a beautiful oasis of the kind they would never have dreamed they could enjoy in the heart of the city. 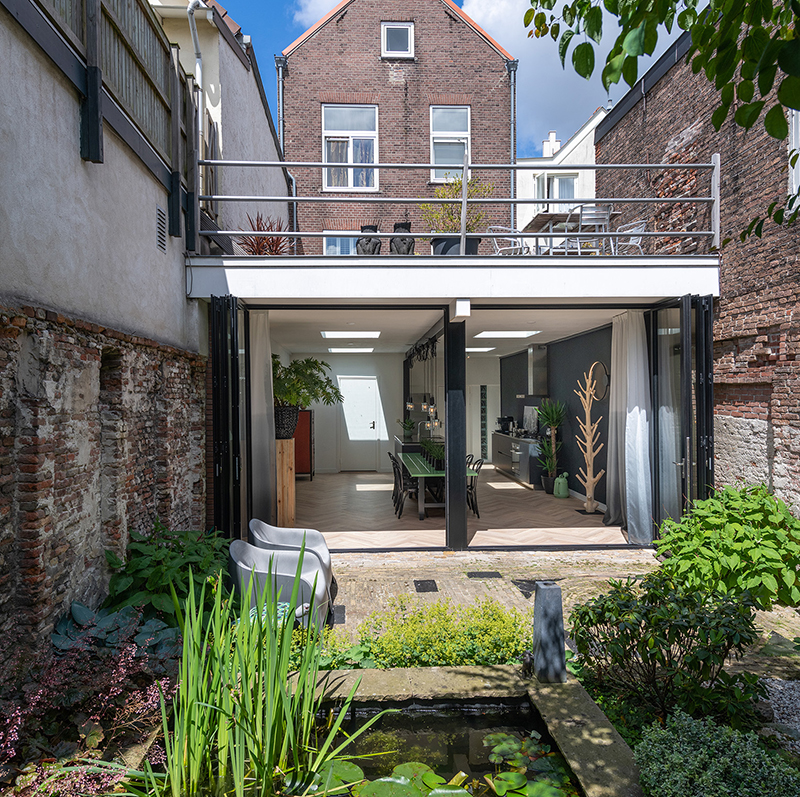