Keukenhof in Lisse, just outside Amsterdam, is the international showcase for Dutch flower cultivation. Over eight weeks from early March to mid-May, it is resplendent with everything Dutch flower cultivation has to offer: a 32-hectare extravaganza dedicated to early bloomers such as tulips and narcissi. This year, however, the masses of visitors were impressed by more than just the flowers themselves – the unusual new reception building was just as eye-catching.

Keukenhof is an important meeting place for dealers. This year alone, up to 25,000 visitors from all over the world flocked to the exhibition – which enjoyed its 68th season in 2017 – every day. In order to cope with the throngs and the growing visitor numbers, a new entrance have been built for the Keukenhof grounds. The project was designed and built by Mecanoo, an internationally renowned architecture firm from Delft. The transparent 3,200 m² building boasts a number of striking architectural features: with its graduated, diagonal, wooden design and enormous span, the bold, latticed roof is a structure that demands attention even from afar. Its woven isosceles triangles form an impressive gateway into the park that offers new and surprising perspectives from every angle. When viewed from below, the geometric shapes frame the Dutch sky beautifully, while from above, one can see the triangular shadows they cast on the ground. The same design is mirrored in the overhead partitions of the interior, which give areas such as the restaurant a bright, airy atmosphere. Keukenhof’s new calling card was built using purist materials such as wood, stone, glass and copper. These allow the building to match its surroundings perfectly. The gatehouse is home to the tills, an information desk and retail businesses. Sustainable and welcoming, its generous dimensions bring together all the facilities its visitors need. 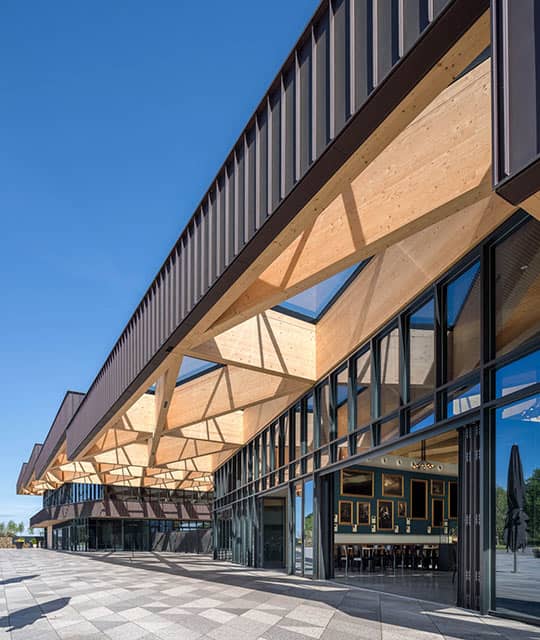 Clear views in every direction

Yet impressive though the building’s roof construction and its view of the Dutch spring sky are, the facade solution has been just as successful, with flexible bi-folding doors that open up almost the entire facade – both visually and physically. This offers a clear view of the outside from every area of the building, at every side. For example, diners in the restaurant can look directly upon the patio and the greenspace that begins behind it. This is particularly effective during the exhibition season in the spring, as it allows the visitors to marvel at the flowers as soon as they reach the reception building.​​​​​​​ 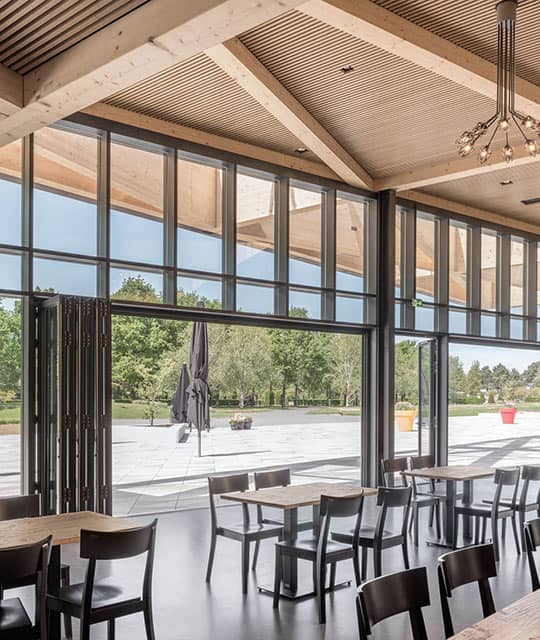 The Solarlux bi-folding doors used for the project can be opened across the length of the room in one simple motion, dissolving the boundaries between inside and out on the warmer days of spring. The glass elements fold outwards following a concertina principle, and can then be simply parked at the side in a single package. And thanks to the extremely low floor tracks, they then provide an accessible transition for visitors moving in both directions. But thanks to the high transparency of the bi-folding doors and the slim profiles, the room retains a remarkably open feel that reflects its environment even when the bi-folding doors are closed.