Solarlux
Inspiration
Reports
Life with bi-folding doors in an open-air houseboat in Holland
Solarlux worldwide Contact us! Stay up to date

“Our friends and family love our houseboat and often say visiting us is like going on a weekend break.“

Life on the water

A houseboat in Utrecht offers an unusual perspective on life

Idyllic windmills, never-ending horizons and a unique web of picturesque waterways: to this day, nothing calls to mind the typical Dutch town quite as evocatively as the country’s “grachten”, or canals. Some of the country’s citizens have even made the water their permanent home – like Lex van Doorn. On the banks of the Vecht, a forty-kilometre-long river close to the Ijsselmeer bay, the water laps quietly against the wooden planks of an Utrecht houseboat. This calming sound has accompanied Lex van Doorn for around ten years, And is just as soothing to him now as it was when he first swapped Amsterdam’s pulsing city life for a peaceful living on a houseboat in Nieuwersluis, just outside Utrecht.

“I grew up in Utrecht,” Lex tells us, beginning the tale of how he moved his life onto the water. “Even when I was little, I was fascinated by the houseboat lifestyle.” The quiet river is home to just five houseboats with permanent residents, one of which belongs to Lex and his son, Beau. “Water always been part of my life,” Lex continues. “I’ve often taken trips to the lake, and even worked as a deep-sea diver for a while.” The 51-year-old is still in the ship business today. “So really, no-one was surprised when I told them I wanted to move into a houseboat,” Lex laughs. 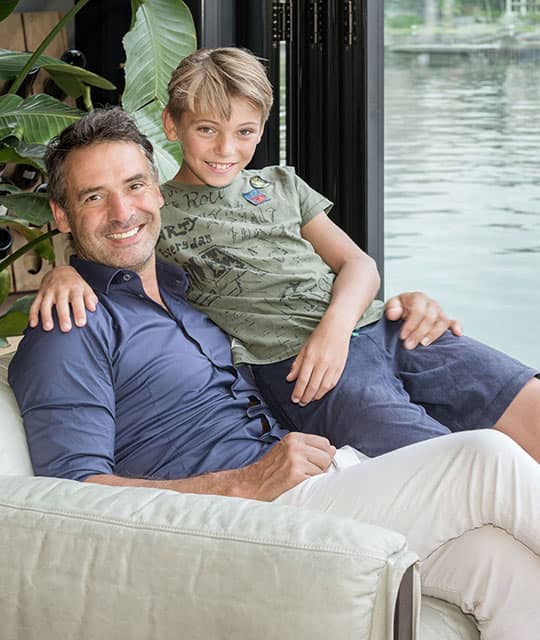 Lex has put a lot of love into his houseboat, making the conversion a real passion project. The boat enthusiast’s top priority during the planning phase was to create a home that boasted both modern architecture and an unobstructed view of the river. “We wanted to give the boat an open, light character.” The materials used in the project are the perfect reflection of this approach: the white cladding combines with the high-quality wood elements and generous glass surfaces to give the houseboat an airy personality. “In addition to the use of wood panelling for the facades, Solarlux’s flexible bi-folding doors made an immediate impression on me.” The conversion was completed in the space of just one month. 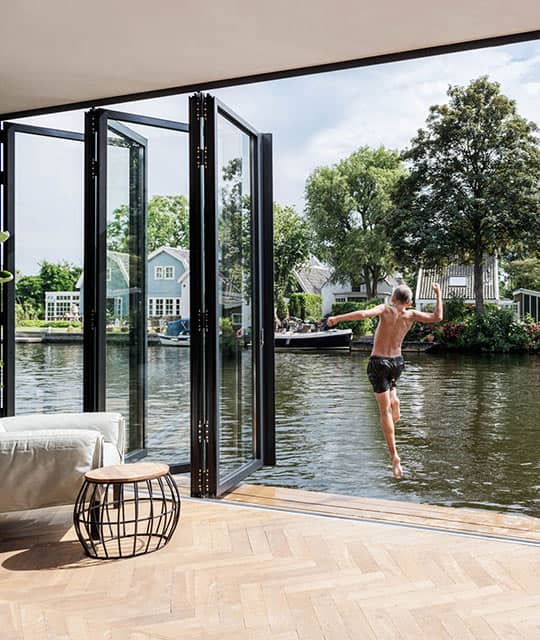 Life on a boat

Today, the houseboat is the absolute dream home for Lex and his son, Beau. The pair really love their lives here, especially in summer, when the glass facade is usually open and the living room becomes an expansive patio. “We love watching the boats go by and enjoying the calming effect of the water.

Beau loves to cool down in the river – by leaping right in off our patio, of course!” Lex laughs. Even in winter, life on the houseboat is truly special. As the nights draw in, the river quietens down and the large glass surfaces keep the atmosphere in the living room warm and cosy.